Notice: wpdb::prepare was called incorrectly. The query does not contain the correct number of placeholders (2) for the number of arguments passed (3). Please see Debugging in WordPress for more information. (This message was added in version 4.8.3.) in /home/epurwthi/www/wp-includes/functions.php on line 4678
 EPUR SUPPORTS AFRICA - EPUR 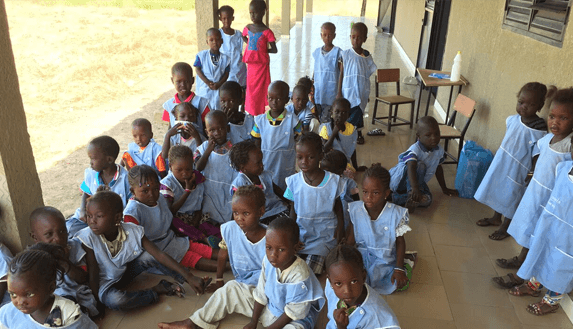 As 2016 gets under way, EPUR shines a spotlight on the SCUOELA association.
In brief…
SCUOELA is an association set up in June 2013 to promote access to schooling and water. It builds and runs schools in remote areas of the world that have no schools and, at the same time, if water is also in short supply, its gives the pupils access to water.
SCUOELA is the fruit of:
– A discovery: in the village of Roff, about 120km south of Dakar in Senegal, five out of every six children weren’t receiving a formal education for want of a school.
– Determination: over and above that of the association’s founder members in France, the determination of two Senegalese brothers, Ousseynou Sarr, vice-president, and Assane Sarr. For many years, they have been taking care of the village of Roff – which is not even their home village – by providing transport, food and clothing, even though they sometimes go without themselves.
– A project, paradoxically: it was the desire to build the school in Roff that prompted the birth of the association. The architect’s plans were already on the desk of the Senegalese education authority when the association held its founding General Meeting:

Under the name of Felix Schola, the school was opened on 16 February 2015 with 61 pupils aged between three and seven. The 2,500 m2 project consists of a main building with three classrooms, each accommodating 100 pupils, a staff office and an ancillary building, in addition to a shower and toilet block (with access to water).
The 2015/2016 school year began on 12 October 2015 with an additional 14 pupils on the roll.
The school’s construction and now its running expenses are financed by donations from private funds, individuals, organisations or partner companies, such as OM Attitude, the Olympique de Marseille football club’s charity, and the EPUR Group.
The school is public, non-denominational and completely free. It is owned by the villagers and staffed by three public-service teachers seconded by the Senegalese government. The association pays the teachers, the supervisors and the maintenance staff.
The association also bears all of the running costs. On top of the staff’s wages, this includes text books, school supplies and even the children’s morning and afternoon teas.
It is essential for young children to go to school because they learn French there, which is Senegal’s official language and the language used for education. The overwhelming majority of villagers in Roff don’t speak French and were deprived of an education up until now.
SCUOELA was born of this first project, but others are in the pipeline: there are plans to set up a system of merit-based scholarships to assist with further studies after FELIX SCHOLA.
“It’s a long job, but it doesn’t matter, even if it’s only a drop in the ocean… SCUOELA exists for that reason and thanks all those who support it.”
O.Blanc, President of the SCUOELA association